Here is Chapter 15 of MARY, FERRIE & THE MONKEY VIRUS.

It is more detailed that the comparable chapter in DR. MARY’S MONKEY.

In particular, it addresses many of the Origin of AIDS theories from 1995.

Epidemiologists says AIDS Case 1 was 1960.  But lots of flawed articles try to put the date earlier, like 1959.  Learn what is wrong with their articles.

Enlarge the Endnotes!   And save your eyes!

Did you have trouble reading the exquisitely small endnotes at the end of each chapter of Dr. Mary’s Monkey?  I did.

And did you get tired of flipping back and forth between the text and endnotes?  I did.

As the author, I had access to a PDF that I could enlarge to 200% and make those interesting, yet annoying, endnotes easily readable.  So I said, “Why can’t all the readers do the same thing?”

Soon the answer became thunderingly obvious to me… Because the readers did not have a PDF of the endnotes.

Guess what I did?  If you can’t figure it out yourself, click here.  Just kidding.  Please enjoy the easy-read endnotes.

This one page PDF focuses on six women from the pages of Dr. Mary’s Monkey who displayed reable courage.

It’s a good way to introduce this book to people interested in history, science, or women’s issues.

What does Oliver Stone have to say about all of this?

Find out for yourself.  Go to the Director’s Commentary of JFK - The Director’s Cut in which Oliver discusses David Ferrie, viruses, cancers, AIDS, polio vaccines, particle accelerators and the U.S. Public Health Service Hospital.  “It’s another story.  Another movie someday.”

Mary Sherman’s Autopsy  << Warning: this is a graphic description of a dead body. >>

For the forensic scientists in the audience, here is the actual Autopsy Protocol from the Orleans Parish Coroner’s Office.  Errata note: The reference to Labia Minora in the summary is inconsistent with the detail inside the document. Therefore, it appears to be a transcription error and should have been Labia Majora.   Photos are not available.

This photo is included because it clearly demonstrates the effect of a high voltage arc on a human body.  It is the closest that I have seen to what was described in Mary Sherman’s Autopsy report.  This photo was taken from a safety presentation that an electrical utility made to its employees who work with high voltage.  The man in question was apparently trying to steal copper wire from a transfer station when he was electrocuted.  The arc entered his right hand which held wire cutters and exited his right arm and pelvis.  Note the carbonized stump of his left arm and the lack of blood.

In July 2007, the cover story on a weekly newspaper in featured Dr. Mary’s Monkey.

CIA “Family Jewel” # 1 is still missing after 40 years.  What is the one secret they continue to hide?

Does it involved a biological weapon?  Did they finance the linear particle accelerator?

I have stated that my grandfather (Thomas P. Haslam, MD, DVD) was part of the team that helped develop one of the first anthrax vaccines.  Here is a historical document confirming that point which describes his role in that anthrax vaccine project.  But the vaccine was for cattle, not humans.  At the time (1916) he was a working at as a veterinarian doctor.  Anthrax, known in the cattle industry as Black Leg, was a significant problem for cattle ranchers.  Aware of the potential for misuse, my grandfather was adamant that medical knowledge should never be used as biological weapons, a perspective he passed on to my father.  He later became an M.D. and taught at SMU medical school in .  He returned to where he lived out his life as a country doctor. 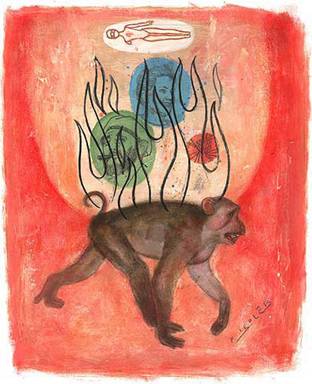 "This illustration was from a magazine that did a review of DR. MARY'S MONKEY.  It was a commissioned work."    The artist was Scary Joey Fiedler from LA.  But who is Scary Joey? Visit ScaryJoey.com

Here is a tour of featuring locations from Dr. Mary’s Monkey.

It is a self-guided tour organized in a logical progression of places.

Links to related websites to speed your research.